Periodically my wife (and frequent co-author) and I like to post short fiction to our blogs to give readers a better, more in depth look at the fictional universes we've created for our stories. To better save you from having to search my blog for these stories, I have created this page to collect them all in one place for your convenience. Hope you enjoy!
Trips to Prospero

Our "Trips to Prospero" series takes an in depth look into the history of Prospero, the town at the center of our scifi/horror, YA series The Prospero Chronicles.

It's 1851, and the small mining town of Prosperous, California is about to find out that not all miracles are a good thing.

It's 1942, and Roy is about to find out that heroes come in all shapes and sizes.

The Stuff of Legends, by Matt Carter.

It's 1955, and in order to find a better life outside Prospero, Judy needs to face a living legend.

It's 1973, and UFO sightings aren't the worst thing about Prospero for Paul and his friends.

Not Quite a Hollywood Ending, by Matt Carter

It's 1984, and Drake finds that Prospero may be home to monsters worse than anything from his favorite horror movies.

Let's Scare the Babysitter to Death, by Matt Carter

It's 1986, and Diana is about to discover that in Prospero, there's no such thing as a simple prank.

Five years before the events of Splinters, Mina is a reluctant girl scout with a secret mission to fight the Splinters.

Two and a half years before the events of Splinters, and Mina is preparing for a date. No, really.
Almost Infamous: Origins 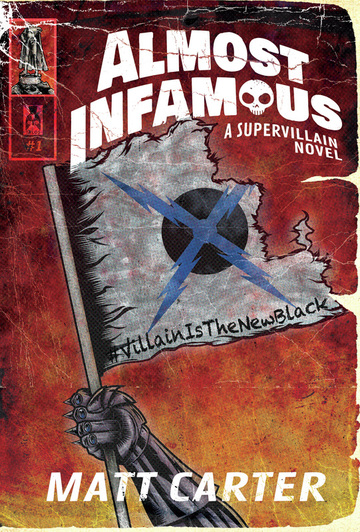 The Almost Infamous: Origins series offers insight into the heroes and villains making up the world of my upcoming (first) solo novel, Almost Infamous.

Superheroes have been a part of everyday life for more than a hundred years. They star in movies, grace advertisements, walk the red carpet, and occasionally save a life or two. Empires have risen and fallen because of them, and time after time they have saved Earth from certain annihilation.

And they have become irrelevant.

With supervillains effectively extinct, superheroes have become idle and are in danger of losing their funding and their livelihoods. Fearing this, a team of heroes have come up with a drastic plan: to create a team of supervillains who answer only to them, staging crimes so they will have someone to fight.

These are the stories of the men, women and monsters who take part in this dangerous program.

These are Almost Infamous: Origins.

A retired former superhero and villain, the immortal Blackjack must consider her future when she is given a dangerous offer.

A gentle soul with dangerous superpowers, the homeless Felix must weigh whether the heroes he idolizes or the friends he's made are most important.

The violent gene-job Carnivore is on the run from the law, chased as if he's a monster. Though maybe this once, the angry mob has the right idea...

Vigilante Ghost Girl has stayed off the heroes' radar so far, but when she sees a terrible wrong that would land her in serious trouble, she has an important decision to make.

Odigjod is an imp from the Third Circle of Hell. By all rights he should look forward to a life tormenting the damned, but he dreams of being something more: a supervillain.

Black market enforcer Iron Bear has always looked up to supervillains for their honesty of purpose, though very little keeps him from joining them.

Helen Campbell has been fired from her low-wage job, and decides to use her heavily armed mech suit, the Firewall, and ability to control machines to enact a little revenge.

Circus recently discovered he could warp reality, and has decided to use this to make life the video game he'd always dreamed of.

Are You Now Or Have You Ever Been

Spasm may not have a spotless track record, but he'll fight for what he believes in, and you never want to challenge his resolve.

Nevermore is a thief with a love for Poe, body art and having a good time, but cross her and you'll see there's more to her tattoos than meets the eye.

Now for something completely different. Helios is a celebrity first and a superhero second, but that doesn't mean he doesn't have a philosophy on what it takes to be a great hero.

Aidan Salt has always considered himself a mediocrity incapable of doing anything to make the world take notice. That's about to change.